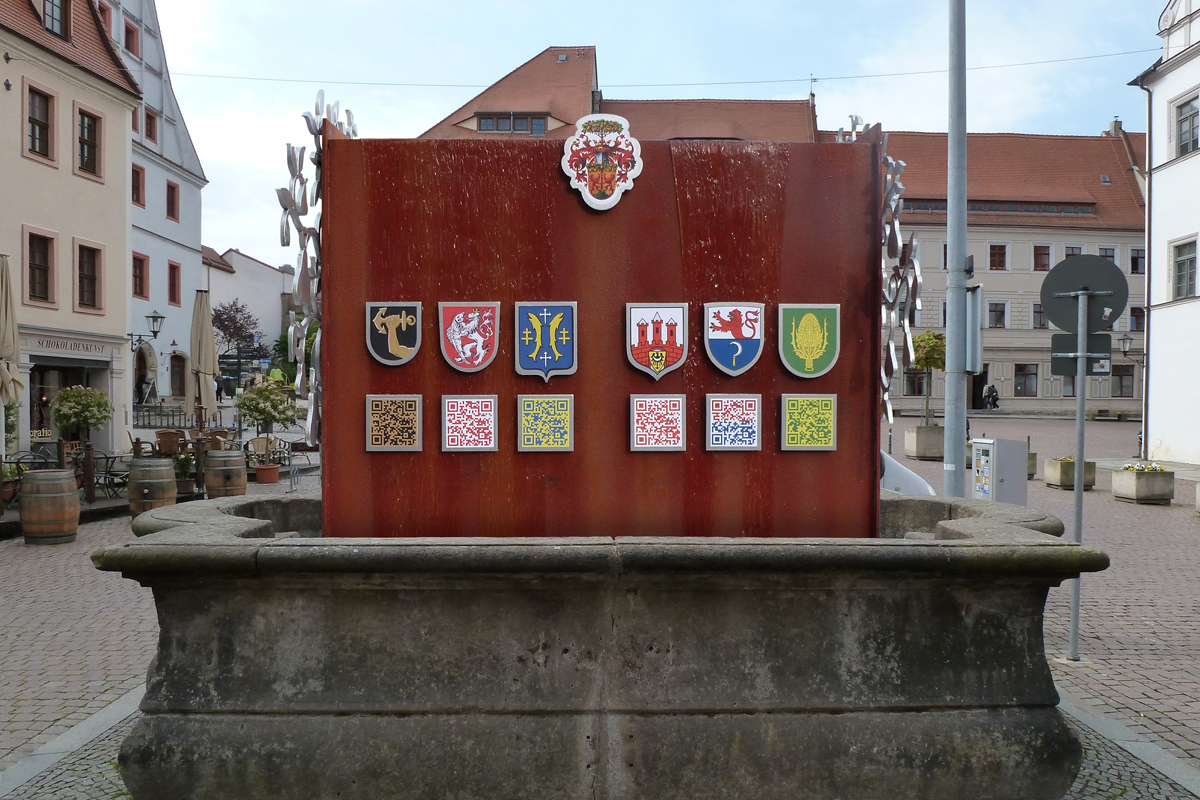 Design for a fountain for Pirna

Design for the fountain at the lower market in Pirna

This draft for the redesign of a market fountain in Pirna is my contribution to a competition from 2015. While retaining the existing sandstone trough from 1905, a new fountain sculpture was to be created. The present fountain design focuses on two main goals: The creation of a vandalism-proof construction made of insensitive materials and the thematic consideration of as many suggestions and requests from the citizens of Pirna as possible within the given budget.

A 2.5 meter high cube made of 10 mm thick Corten steel plates is located on a stable base frame. This material with its rough patinated surface stands for the past and durability. Corten steel does not rust through, but rather forms a protective layer on its surface against further corrosion. The roof of this cuboid forms a tub a few centimeters deep into which water is pumped from the well. This water flows like a curtain over the long sides of the main body.

On all four sides of the corten steel cuboid there are panels made of brushed stainless steel, which are cut in different shapes or printed with different motifs. With spacers, they seem to float in front of the walls. With their glossy surfaces, these panels form an attractive contrast to the dark back walls covered with “patina”. On the long sides, the water curtain flows between the stainless steel panels and the Corten steel walls into the fountain trough.

Culture and openness to the world

One of the two differently designed long sides refers to the market of cultures, which takes place every year in the center of Pirna. A group of figures lasered from stainless steel depicts foreign dancers and musicians. A qr code etched into the steel below the figures links directly to the homepage for the “Market of Cultures” event and to other cultural events in Pirna. Users of smartphones and tablets can call up and view information about the events directly at the fountain. Due to the stylized steps on the fountain trough, the group of figures looks like on a stage. The water flowing down behind the figures gives an impression of freshness and cooling.

The pear tree as a symbol of Pirna

On both ends of the cuboid, metallic pear trees protrude from the fountain trough. Sufficient material thickness also ensures protection against vandalism here. The convex arches on the short sandstone trough sides act like oversized planters for the steel trees.

In order to take into account as many suggestions from the citizens as possible and to generate the greatest possible approval from the population, this fountain design is not subject to a single selected topic. Instead, as was common in earlier times, the fountain should become a place of communication, a place of information and exchange. For this purpose, in addition to the stainless steel panels with the coats of arms of the twin cities, the stainless steel panels with the motifs from the history of Pirna and the silhouette-like representation of a scene from the market of cultures, there are further stainless steel panels with printed or lasered qr codes. By scanning these qr codes with a smartphone or tablet, viewers can quickly and easily access special websites. This process, known as mobile tagging in information technology, has now become established and is used very frequently in advertising.

The Internet pages that can be accessed via the qr codes can contain, for example, greetings from the partner cities, data, facts, images and films on the history of Pirna or direct links to cultural events – such as the Market of Cultures. Interactive areas such as a digital Pirna guest book are also conceivable. To create this digital content, the partner cities can be offered to create their own greetings for Pirna. These greetings can contain portraits of the twin cities as well as video messages from the mayors or films. In this way, the partner cities can introduce themselves in a friendly way directly at the fountain in Pirna and the fountain becomes a real center of networking and external relations of Pirna. School classes as well as associations and historians can be included in the creation of the Internet content on the history of Pirna that can be accessed via the fountain sculpture. In this way, the fountain sculpture can generate a wealth of new projects that promote partnership and community spirit. The digital content on the Internet can be further developed, changed and expanded at any time, even after the physical fountain sculpture has been set up. It is not necessary to convert the well or change the QR codes. This fountain design goes far beyond the scope of the competition. In addition to the physical design level, it also includes a digital level. It is analog and digital, material and immaterial, static and dynamic at the same time. The qr codes represent the link between the steel fountain and the associated internet content. The latter are variable and thus guarantee that the fountain is always up-to-date and becomes a place of information and communication again. Pirna would have received a fountain in this form that would be unique in Germany. Unfortunately, the concept and design did not receive an award and the jury preferred another design.

back to sculpture
back to gallery